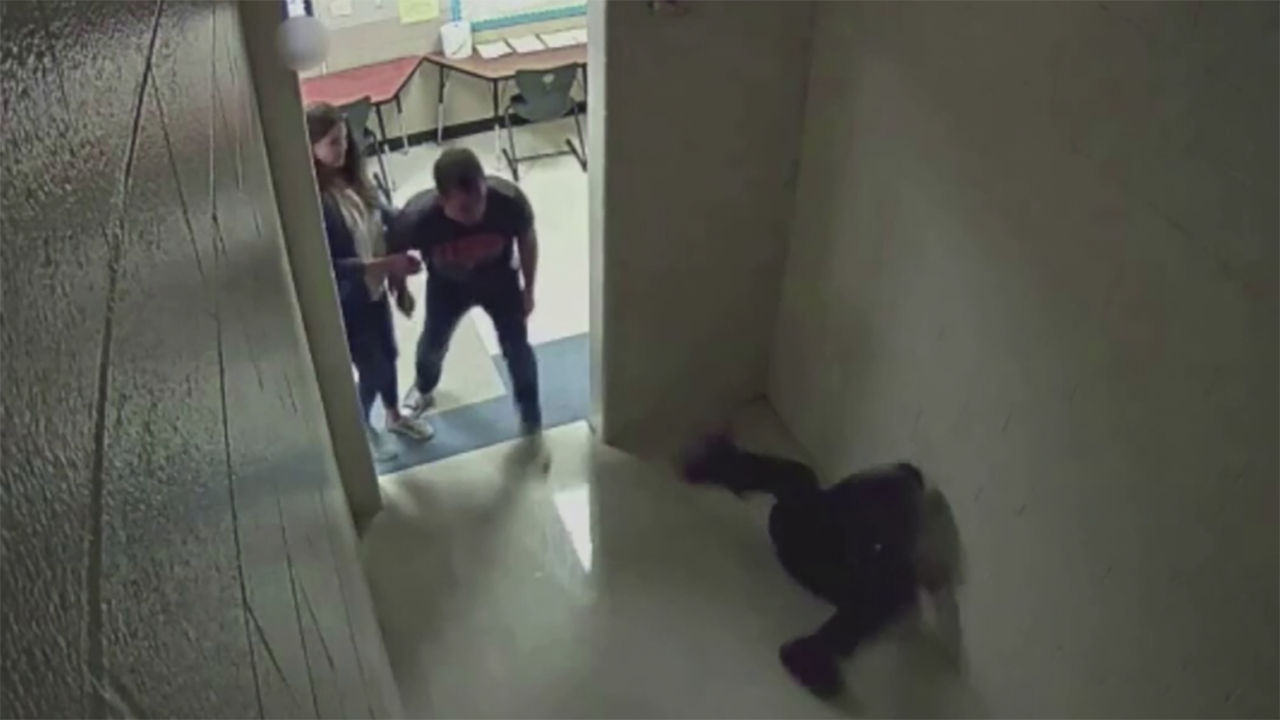 Surveillance video released by a concerned mother appears to show a school administrator throwing a 14-year-old boy into a wall earlier this year at a school in Round Rock, Texas.

The incident happened on April 29 at GOALS Learning Center, a school for students with a primary disability of emotional disturbance.

The mother, Tatiana Alfano, told Fox 7 Austin that she received a call and email from the school saying that her son had been defiant and had hit his head when he fell.

Her son, Quintin Proctor, was insistent that the school administrator actually threw him into a wall, and his mother was shocked after she received surveillance video of the incident from the school two weeks later.

The student was standing in a hallway right before he attempted to leave.
(Round Rock Independent School District via Fox 7 Austin)

The video shows Proctor in a hallway with two female teachers and the male administrator. He told Fox 7 Austin that he had been brought into the “cool down room” after yelling at his teachers.

The two teachers turned to leave and Proctor attempts to follow them, at which point the administrator appears to grab Proctor and throw him into the wall.

WILD BRAWL BREAKS OUT AT END OF ARIZONA HIGH SCHOOL BASKETBALL GAME: ‘IT WAS UGLY’

Proctor got up and reared back his arm multiple times as if he was going to throw a punch, but never actually did. He was later escorted down a different hallway by the teachers.

“When I hit the wall, I didn’t really know what to think, like my mind just kind of went blank,” Proctor told Fox 7 Austin.

Quintin Proctor says he was thrown by an administrator into a wall.
(Round Rock Independent School District via Fox 7 Austin)

A spokesperson for Round Rock Independent School District said that the administrator is no longer on campus at GOALS Learning Center.

“The incident was fully investigated by the district and reported to all appropriate state agencies,” Jenny LaCoste-Caputo, the spokesperson, told Fox News Digital.

“The staff member is currently employed by the district but is no longer on a campus. He is assigned to special projects at Central Administration.”

The 14-year-old hit his head against a wall.
(Round Rock Independent School District via Fox 7 Austin)

His mother said she is sharing the surveillance video because she’s heard similar stories from other families.

“What happened with Quintin isn’t all that unique or special or rare. It’s just that we happen to have footage of it because these things are generally happening behind closed doors, so now it’s grown, it’s bigger,” Alfano told Fox 7 Austin. “We need to do right by all the children. This shouldn’t be happening.”

Paul Best is a breaking news reporter for Fox News Digital and Fox Business. Story tips and ideas can be sent to Paul.Best@fox.com and on Twitter: @KincaidBest.