Spotted lanternflies are on the most wanted list: Get ready to stomp 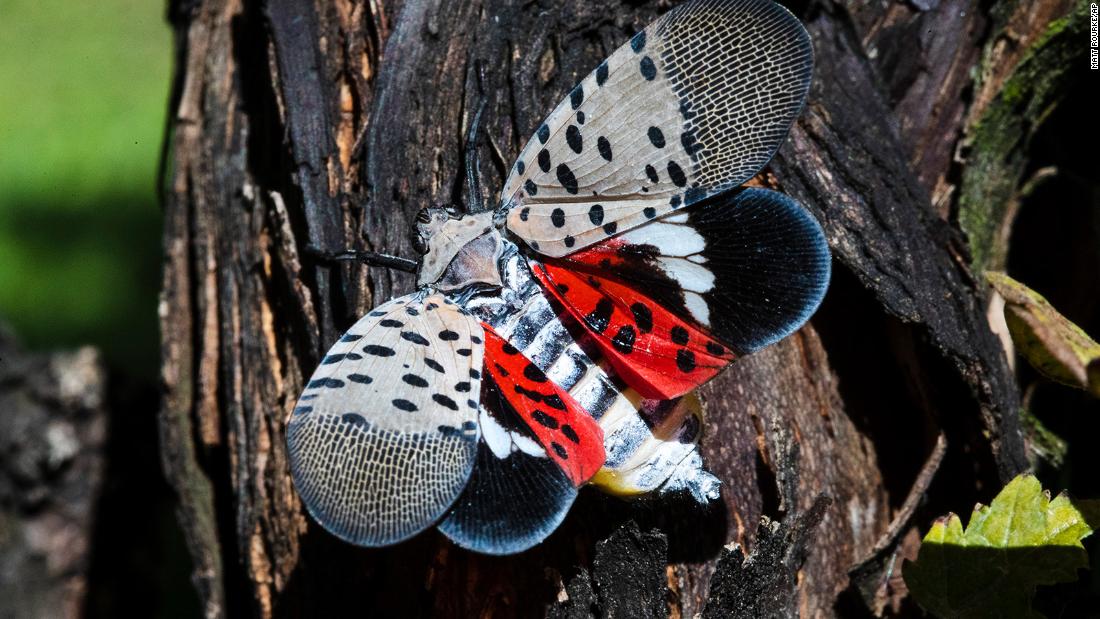 Your victim: the spotted lanternfly, or Lycorma delicatula, a beautiful creature with large brownish gray wings with black spots that open to reveal striking red underwings.

Why the call for mass bugicide? After all, the striking insects aren’t venomous, and don’t even bite humans or pets.

What spotted lanternflies do instead is suck the life out of many species of trees and plants, including those that people rely on for food and livelihood, such as grapes, apples and hops. The situation has been so severe in Pennsylvania that the state could lose about 2,800 jobs and $324 million annually if the invasive pest is not contained soon, economists from Penn State’s College of Agricultural Sciences have predicted.
The hunt to track and kill each and every lanternfly fugitive is so intense Pennsylvania officials set up a hotline to report sightings: 1-888-4BADFLY.

“The bugs are hitchhikers,” said entomologist Gene Kritsky, dean of the school of behavioral and natural sciences at Mount St. Joseph University in Cincinnati. “If you should visit an area where the spotted lanternfly has been found, you should inspect your vehicle and clothing to make sure you have not given one a ride. This can help slow down their spread.”

Other states are buzzing with worry as the pesky predator invades their counties. Connecticut, Indiana, New York, North Carolina, Ohio, Virginia and West Virginia have all reported sightings, but “most states are considered at risk,” according to the USDA Animal and Plant Health Inspection Service.
The voracious bug will likely even reach California’s wine country by 2033 if current methods fail to stop the spread, scientists have predicted.
In parts of the East Coast, the infestation is so bad that Democratic Sen. Chuck Schumer of New York has called for the USDA to spend over $200 million to bolster the state’s efforts to fight the spotted lanternfly. Schumer also said he would ask Congress for an additional $22 million in 2023 to help states to prevent and fight invasive species.
States are taking this bug invasion seriously: North Carolina held a “squishathon” in September 2021, as did New York City’s borough of Staten Island, to warn residents of the dangers and educate them on the best ways to kill the pests.

Stomping and squishing is a proven method, experts say — but be quick! Lanternflies are lightning fast on their wings. You can also put sticky tape on tree trunks, rocks and fence posts where the bugs like to lay eggs (but be careful not to trap other small creatures). Once the tape is full and the bugs are dead, discard it.

You can also help by killing the bug’s egg masses, “which look like someone smeared mud on tree trunks, trucks, campers, tents, and other surfaces,” Kritsky said.

“If found, the egg masses should be scraped off the surface and sealed into zippered storage bag along with a good dose of hand sanitizer. The sealed bag should be carefully disposed of in a way that will not tear open the bag,” Kritsky advised.

Want to keep up with your spotted lanternfly kills, like notches on a gunslinger’s belt or Dexter Morgan’s blood-smeared slides? You can track your serial bug murders on an app called Squishr.
“KILL THESE BUGS! They jump and fly and are hearty like a roach,” tweeted one successful mass murderer. “Been using flat spatula-like sticks to smash them.”
Sometimes killing the pests can seem like mission impossible: Twitter users are bug-bombing the social media platform with accounts of spotted lanternflies crawling on a building near Broadway in New York City, swarming a tree in Woodbridge, New Jersey, and hitching a ride on commuters.
“A few of them attached themselves to my husband at a rest stop in NJ last weekend & tried to hitch a ride to VA. Another driver & I managed to get them off before he got in the car. So I am personally taking credit for saving my commonwealth from those pests,” tweeted a proud citizen.
Be sure to report the bugs you spot to your state agency: The USDA has reporting information by state here. But before you kill it, “photograph it with your smartphone,” Kritsky said. “Make sure your GPS or location services are turned on as that will provide the coordinates of where you took the photo.”

Prevention efforts are critically needed, experts say. These bugs like to lay eggs on tires, grilles and bumpers on cars, so don’t park under trees or near bushes in an area with a known infestation. Always check your vehicle for stowaways, and do the same for recreational vehicles, as well as building materials, firewood, propane tanks and outdoor machinery.

And don’t forget to check outside play sets and toys, garden tools and outdoor furniture before bringing them inside for the season.