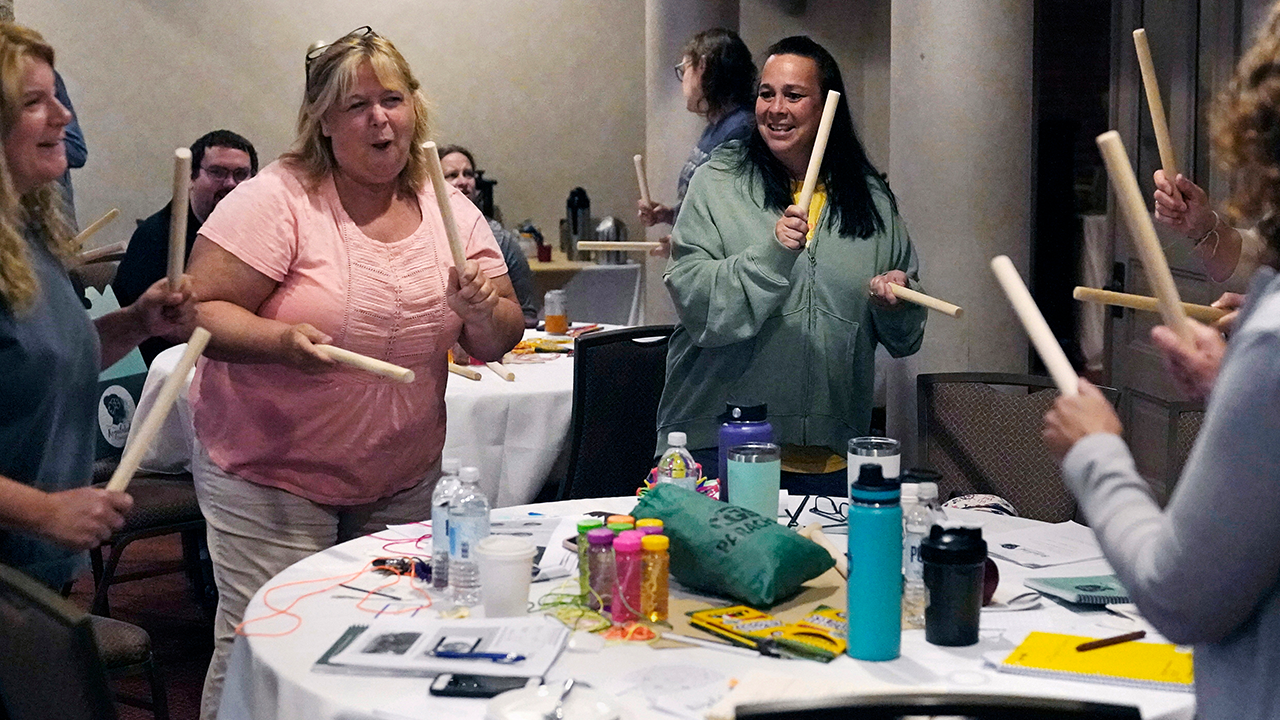 School districts across the country are rolling out initiatives to help alleviate stress among educators that was exacerbated during government-ordered pandemic lockdowns and has continued to this year as districts struggle with staffing issues and students who have fallen behind socially and academically since the lockdowns.

“The demands on all of us were really high and we were trying to make up for lost time for the couple of years that they fell back on their curriculum. But we forgot that they haven’t been in school for a couple of years so they missed that social-emotional piece. We are dealing with that in the classroom,” a New Hampshire fifth grade teacher, Karen Bowden-Gurley, told the Associated Press.

About 20 New Hampshire teachers recently took part in a two-day workshop to combat burnout and address stressors through a program called The Regulated Classroom. The classes included exercises on “collective rhythm making,” including by using wooden sticks to follow the tune of Prince’s “Raspberry Beret” and learning meditation practices.

“I think it’s not an understatement to say that a lot of educators find their work quite stressful at this point, and lacking much joy,” Emily Daniels, who led the workshop and founded The Regulated Classroom, told Fox News Digital on Sunday in a phone interview. “They come to school with a lot of trepidation and anxiety about student behavior, about pressures and expectations of performance, when oftentimes they feel as though the students aren’t really available for learning.”

Teachers and guidance counselors tap wooden sticks during a rhythm exercise during a workshop helping teachers find a balance in their curriculum while coping with stress and burnout in the classroom, Tuesday, Aug. 2, 2022, in Concord, N.H.
(AP Photo/Charles Krupa)

Daniels founded her business ahead of the pandemic, and told Fox News Digital that it will see a 1,000% to 2,000% increase this year compared to 2021.

“What’s happening is our Department of Education, they’re basically getting phone calls on a daily basis from districts going, ‘Oh my God, what are we supposed to do? We can’t even get enough warm bodies to fill a position,’” Daniels told Fox News Digital.

“When you have that, when it’s like that and everyone’s feeling really desperate, you better have some other source of energy to come in and not feel completely overwhelmed by the circumstance.”

Daniels told Fox News Digital that she offers clients an understanding of a construct called the Polyvagal Theory, which argues that “cognitive and emotional intelligence stems from our physical state,” according to Daniels’ website.

“When our bodies feel constantly threatened or anxious or fearful, the body actually changes how it functions. And that changes our behavior to become much more… protective. So then we end up showing up in these much more agitated ways. It changes our behavior, it changes just our way of how we perceive the world,” she said. Daniels added that giving teachers the right tools on how to cope with stressors and anxiety also amounts to an investment in students, as adults can set the tone on how to be grounded and healthy, which is then inherited by the students.

One researcher at the University of Delaware School of Education found that levels of depression, anxiety and emotional exhaustion among elementary school teachers are 100% to 400% higher than before the pandemic

“It’s all pretty bad,” said Leigh McLean, the primary investigator at the Teacher Emotions, Characteristics, and Health Lab at the University of Delaware School of Education.

TEXAS TEACHER ON DECISION TO QUIT AND WHY MANY OF HER COLLEAGUES ARE DOING THE SAME: ‘JUST TOO MUCH TO DO’

As the new school year kicks off, districts across the country are suffering with staffing shortages that began plaguing school districts nationwide during the pandemic. Teachers had sounded off about burnout stemming from the uncertainty during lockdowns, including switching to remote learning, moving to hybrid learning, and eventually transitioning back to in-class instruction in 2020 and 2021. Teachers unions often supported remote learning, even as late as 2022 in cities such as Chicago.

About 300,000 public school teachers and staff have left the field between Feb. 2020 and May 2022, according to data from the Bureau of Labor Statistics. A February survey from the National Education Association found that 55% of teachers reported that they are thinking about leaving the profession. A whopping 79% of teachers report dissatisfaction with their careers, according to a July American Federation of Teachers survey.

Teachers trace the lead line while sketching during a sensory motor therapy exercise at a workshop helping teachers find a balance in their curriculum while coping with stress and burnout in the classroom, Tuesday, Aug. 2, 2022, in Concord, N.H.
(AP Photo/Charles Krupa)

Teachers reported that the fallout from lockdowns is not their only stressor. They also pointed to the threat of school shootings, such as the one in Uvalde, Texas, in May that left 19 students and two teachers dead. Daniels argued that parents speaking out against some curricula taught in school districts, students being socially and academically behind following remote learning, and more violence reported among students at schools have added to the stressors educators feel.

To help retain teachers and prevent burnout, some districts have increased mental health training for staff, hired social and emotional learning coaches for educators, are holding classes on breathing exercises for teachers and students, and one Texas school district even plans to build “calming rooms” for teachers, where they can go and chill out during times they aren’t in the classroom.

Instructor Emily Daniels, left, raises her arms while leading a workshop helping teachers find a balance in their curriculum while coping with stress and burnout in the classroom, Tuesday, Aug. 2, 2022, in Concord, N.H.
(AP Photo/Charles Krupa)

Kelly Hurd, a kindergarten teacher, said the recent two-day workshop in New Hampshire gave her a sense of “renewal” for the next school year.

“I love teaching and I love the kids but it’s also hard,” Hurd, who experienced burnout before the pandemic and was part of the New Hampshire training, told the Associated Press. “The pandemic was so hard and so impactful and so stressful. I feel a sense of renewal and excitement and I do feel like I’ve been given permission to have more fun and focus on joy in school.”

The Associated Press contributed to this article.