Ron Rivera on why Commanders have fallen behind in NFC East: ‘Quarterback’ 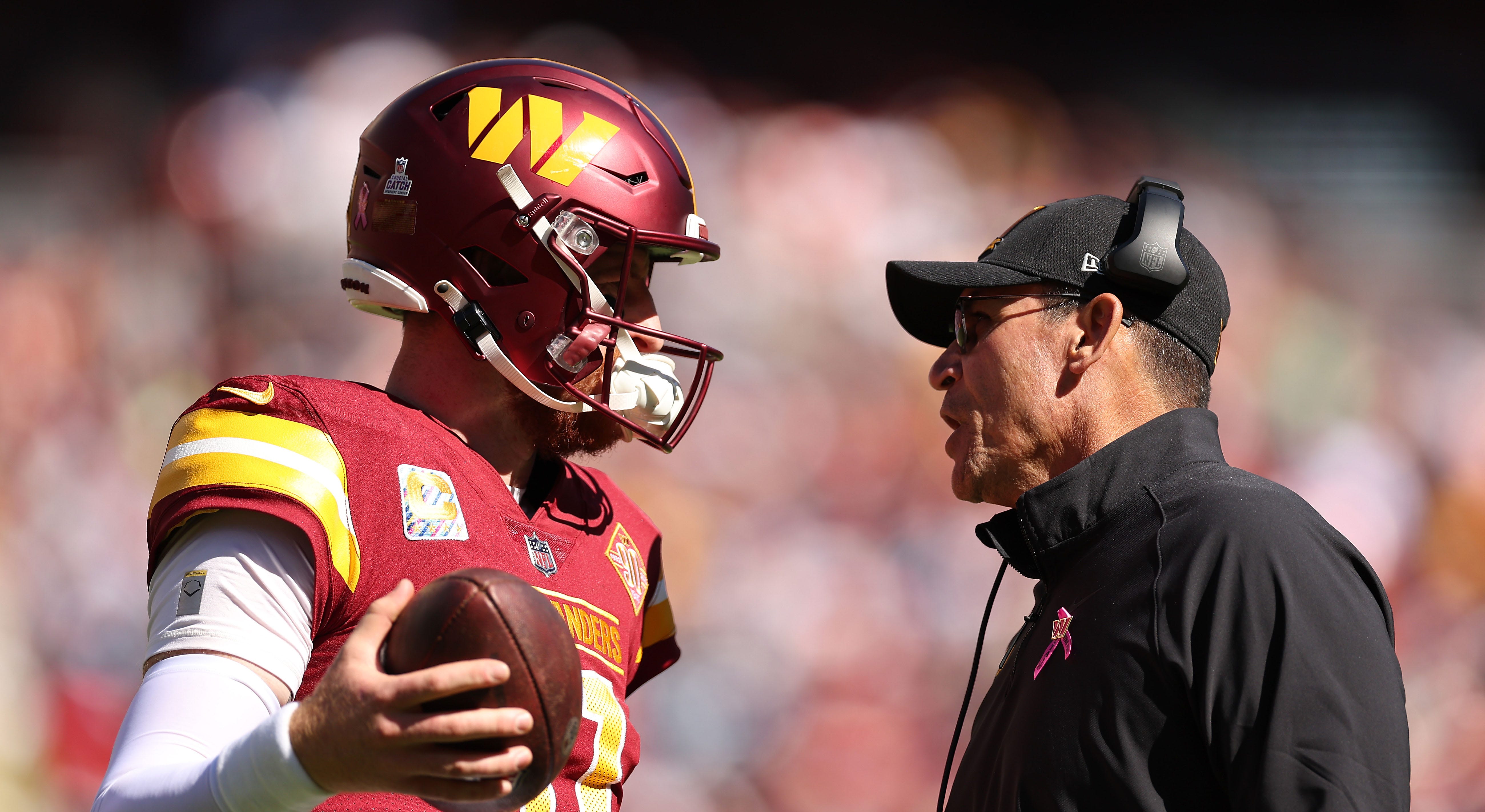 The Washington Commanders hasn’t gotten the memo that the NFC East is back just yet.

The NFL’s best team by record, the Philadelphia Eagles at 5-0, and two 4-1 teams, the Dallas Cowboys and New York Giants, have surprised many throughout the NFL. The NFC East has struggled in recent years, and the Commanders at 1-4, still feel that hurt this season.

So what has been the factor that has the Commanders at the bottom of the division? Head coach Ron Rivera was quick to answer on Monday.

Carson Wentz #11 of the Washington Commanders reacts after a throw during the fourth quarter against the Tennessee Titans at FedExField on Oct. 9, 2022 in Landover, Maryland.
(Scott Taetsch/Getty Images)

Carson Wentz was the choice of Rivera and the front office when they made a switch at the position. They needed someone to come in this offseason and jumped on the chance to trade for the veteran signal caller that knows a lot about the NFC East given his time with the Eagles.

Thus, Wentz was thrust into the Commanders’ system that has some good weapons: Terry McLaurin and Curtis Samuel at receiver with good running backs in Antonio Gibson, Brian Robinson Jr., who made his debut on Sunday five weeks after being shot twice before the season, and J.D. McKissic.

But what’s written on paper doesn’t always translate to the field. While Wentz is fourth in the league with 1,390 yards, he has a 38.0 QBR, good for 24th. He has 10 touchdowns and six interceptions, one of which came on the final drive Sunday against the Tennessee Titans on the goal line. A touchdown would’ve won the game for Washington.

While this was Rivera’s guy, the Cowboys have had their backup, Cooper Rush, lead the team to four straight wins, including one over the Commanders.

“They started with Dak [Prescott],” Rivera said when asked about Rush’s success. “They build around Dak and the offense is built around Dak. Their back up is a guy that is very solid inside of what they do. The truth is this is a quarterback-driven league. And if you look at the teams that have been able to sustain success, they’ve been able to build it around a specific quarterback.”

Carson Wentz #11 of the Washington Commanders talks with Offensive Coordinator Scott Turner prior to the game against the Tennessee Titans at FedExField on Oct. 9, 2022 in Landover, Maryland.
(Scott Taetsch/Getty Images)

The Cowboys have certainly built their team around Prescott. The Eagles have done the same with Jalen Hurts, as head coach Nick Sirianni has adapted his system around the explosive abilities his quarterback gives him on the ground and through the air.

But have the Giants built things around Daniel Jones? Head coach Brian Daboll and GM Joe Schoen did their best to crunch their roster and kickstart their rebuild, but Jones didn’t have his fifth-year option picked up, leaving his future with the team in limbo.

Daboll and OC Mike Kafka’s offensive scheme has been all about adjustments throughout the game, and they currently rank 23rd in yards per game with 333.2. With some help from the defense and clutch play by Jones & Co., they’re getting the job done when needed.

Rivera, though, doesn’t regret going with Wentz and won’t be giving up on him any time soon. They believe in their quarterback despite the rocky start.

“I think our quarterback has done some good things,” he explained. “There’s been a couple games that he struggled, but you look at his numbers from yesterday and you would say, ‘Okay, look, his numbers he’s had throughout the year, there times he was very solid.’ But the way he performed yesterday, and it just shows you what he’s capable of, and we chose him because we believe in him. We chose him because we looked at what we felt were things that pointed towards him.”

Carson Wentz #11 of the Washington Commanders talks with head coach Ron Rivera during the first half against the Tennessee Titans at FedExField on Oct. 9, 2022 in Landover, Maryland.
(Scott Taetsch/Getty Images)

The Commanders are currently middle of the pack at 19th in the league in offensive yards per game at 341.6.

Washington has the Chicago Bears, a team that has lost their last two contests, on the schedule this Thursday.

Scott Thompson is a sports writer for Fox News Digital.

One thought on “Ron Rivera on why Commanders have fallen behind in NFC East: ‘Quarterback’”