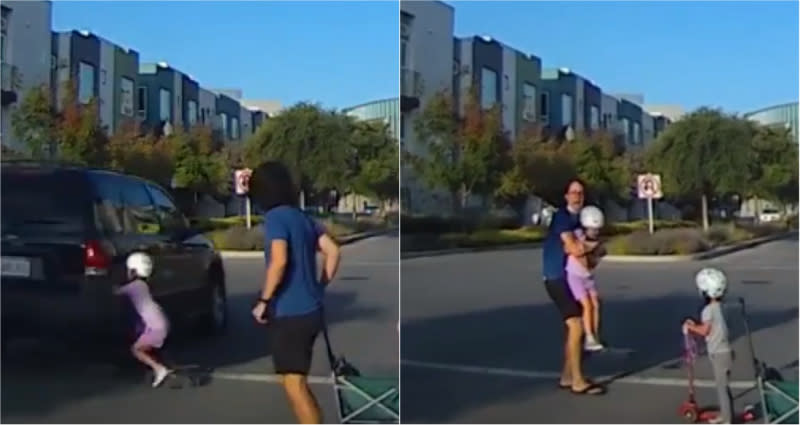 An investigation is underway after a little girl was almost hit by a moving vehicle last week in San Mateo, California, police said.

Jison Hong was at a traffic stop on Sept. 14 when the camera on her dashboard caught a girl on a scooter nearly being struck by a dark SUV that did not stop for the girl and her family as they crossed the street.

The barreling vehicle hit the front part of the girl’s scooter, causing her to fall forward, but no serious injuries have been reported.

The incident occurred near Franklin Parkway in the Bay Meadows neighborhood, KTVU reported.

Police have identified the speeding driver as an inexperienced teenage boy.

“If it had been, you know, a few seconds later she could’ve gotten seriously injured,” Hong told ABC7. “Still, my heart kinda pounds every time I kinda think back to that moment.”

The girl’s father told the station that she is doing just fine, but the family is still in shock.

More from NextShark: Woman Arrested and Charged for Bashing Asian Victim’s Head With a Hammer in NYC

“I’m very grateful to the community for their support and to city government for their quick action on this particular crosswalk but also hoping for lasting improvements to other crosswalks like this,” he said.

Hong and her neighbors have notified the city of issues at the intersection several times over the years.

“We are monitoring the traffic in that area so that we can continue to be proactive and make sure that the area continues to be safe for the residents and pedestrians and other motorists,” Officer Alison Gilmore of the San Mateo Police Department said in response.

City Manager Drew Corbett issued a statement, saying the incident could have been prevented.

“When something like this happens we have to ask why, and as a result we’re taking immediate action to further improve safety at this intersection. Our Council prioritizes neighborhood traffic safety and in response to this incident we’re increasing pedestrian visibility and reducing speeds in this area while we continue to look at longer term options that legally require more analysis,” his statement continued. “We also need a community-wide approach to improve roadway safety and everyone, whether you’re driving, biking or walking, plays a role in making sure we protect each other.”

Long-term solutions include implementing safety improvements, such as stop signs, lane closures or speed reductions, under the state vehicle code. The city also says it will continue to collect and analyze data to improve traffic safety efforts.

One thought on “Residents demand change after girl nearly struck by SUV while crossing street in San Mateo, California”