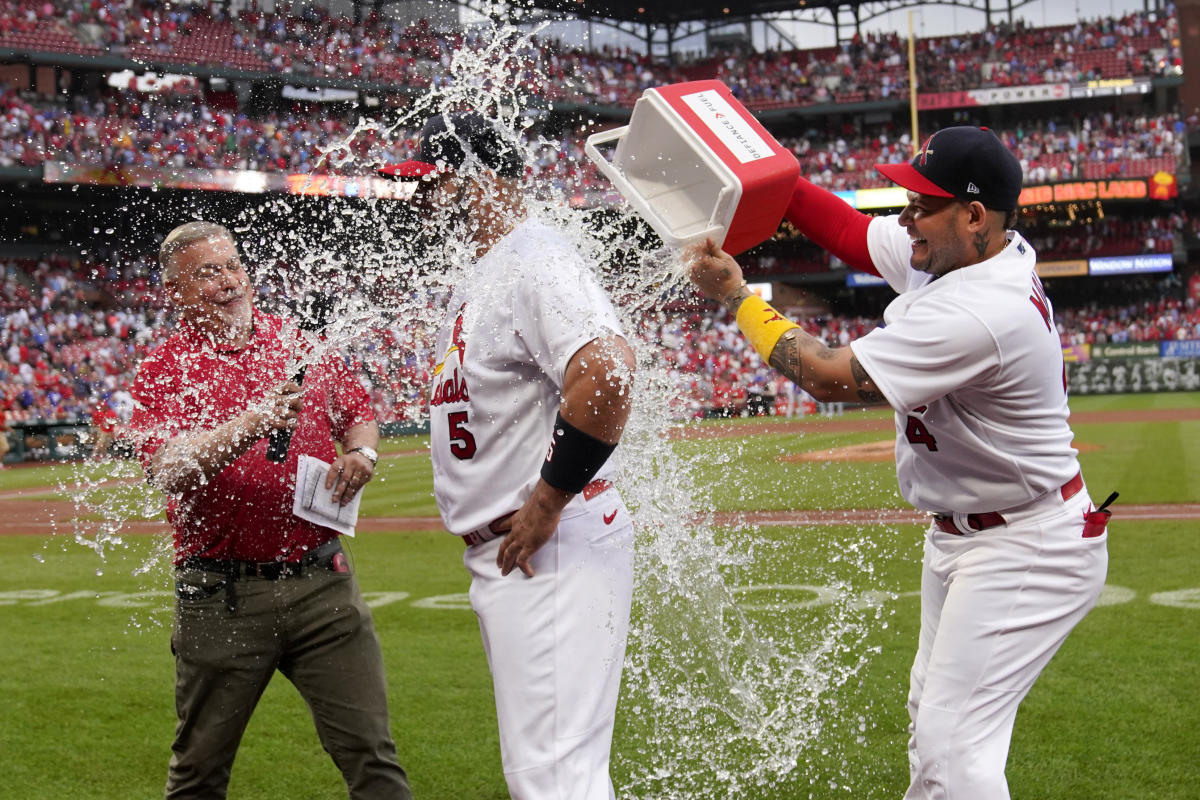 ST. LOUIS (AP) — Albert Pujols collected home run No. 695 in the eighth inning and Miles Mikolas tossed eight shutout innings to lead the St. Louis Cardinals to a 2-0 win over the Chicago Cubs on Sunday.

Pujols has seven pinch-hit homers in his career, including two this season. He has homered against 451 different pitchera, an all-time record.

Tommy Edman started the rally with a one-out double.

“I was 100% confident that he was going to find a way to drive me in,” Edman said. “As crazy as it is, we just expect that to happen now. He’s the best right-handed hitter of our generation.”

Pujols, in his last season, has found a way to come through in dramatic fashion all season long.

“There’s times in this game where you take a step back from being locked into the game and you get to be a fan for a minute, and experience it the way everyone else is,” St. Louis manager Oliver Marmol said. “That was one of them. You take it all in because what he’s doing is absolutely incredible.”

Pujols hit his 130th career home run on Sundays, the most of any day.

Chicago manager David Ross indicated that he would have walked Pujols if Hughes got behind in the count.

“You’ve got to trust your guys,” Ross said. “Wanted to attack Albert. He just left one over the middle.”

Chicago has lost seven of eight.

Mikolas (11-10) gave up two hits. He struck out three and walked one. Ryan Helsley earned his 13th save in 17 chances.

Chicago starter Marcus Stroman allowed four hits in seven shutout innings. He struck out five and did not walk a batter in a 98-pitch stint.

The start of the game was delayed 1 hour, 28 minutes by rain.

The Cardinals have scored 91 runs in the first inning, second to the Los Angeles Dodgers with 95.

Cubs: C Willson Contreras missed the game with a sore left foot. He suffered the injury Tuesday against Toronto.

Cardinals: LHP Steven Matz will make a rehab start on Tuesday at Double-A Springfield. He has been out since Aug. 8 with a left knee sprain.

Cubs: LHP Wade Miley (1-0, 2.84 ERA) will start on Tuesday as the Cubs begin a six-game homestand by hosting Cincinnati. Miley has been out since June 11 with a left shoulder strain. RHP Justin Dunn (1-2, 4.63) will start for the Reds.

Cardinals: RHP Jack Flaherty (0-0, 5.63) will face Washington RHP Anibal Sanchez (1-5, 5.05) in the first of a four-game series on Monday afternoon in St. Louis. Flaherty has been out since June 27 with a right shoulder strain. He made five rehab starts in the minors.

One thought on “Pujols reaches 695 HRs, Mikolas goes 8 in Cards’ win vs Cubs”