One Democrat who spoke to the White House repeatedly about the issue described talks as 'tortured.' Here's how the call was finally made. 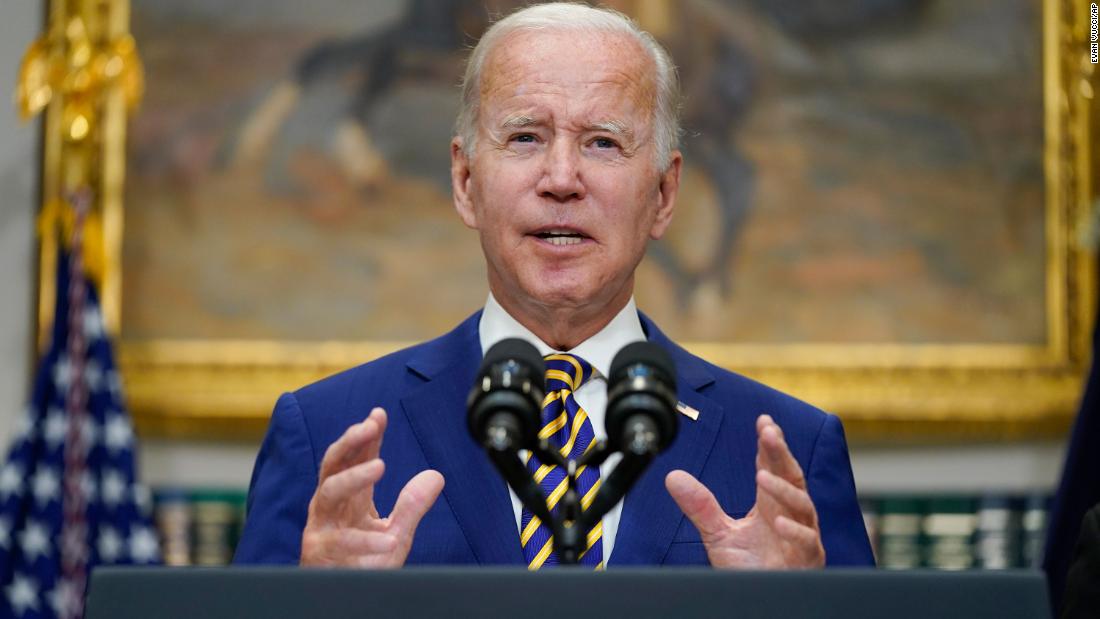 With graduation season just around the corner, the moment felt especially ripe: Some in Washington speculated about the fourth weekend of the month, when Biden was slated to give two back-to-back commencement speeches at the US Naval Academy and the University of Delaware. White House officials briefly considered unveiling their plan then.

But graduation season came and went with no announcement.

In fact, he would wait until the next school year had already started in some parts of the country to announce from the White House his decision to forgive up to $20,000 in student loan debt for tens of millions of Americans.

Even for a famously indecisive President, the question of whether to use executive powers to forgive student loan debt appeared particularly long and drawn-out. Interviews with nearly a dozen people familiar with internal deliberations revealed a myriad of factors fueled the delay, none more than Biden’s concerns over inflation and his insistence that the forgiveness plan would not be seen as a handout to the wealthy.

Asked to describe the process, one Democrat who spoke to the White House repeatedly about the issue responded with a one-word text message: “Tortured.”

Complicating matters as Biden settled into his first term in office was a myriad of national crises and international events that took up his energy and time — from the escalating war in Ukraine to the rising gas and consumer goods prices fueling economic pessimism.

At various points of the year, administration officials simply felt that “it was so much easier to just continue to delay,” one Washington Democrat said. They added bluntly: “There was sh-t going on.”

But outside distractions accounted for only part of the delay.

Biden agonized over legal concerns, moral hang-ups and persistent questions about the plan’s fairness and its potential to exacerbate inflation — the biggest political liability for his party heading into the fall.

As he mulled over each of these concerns with advisers and lawmakers, the President made clear that he was looking to feel convinced that — on both the policy and political front — there was undeniable merit to taking action, sources said.

The decision he ultimately unveiled this week — canceling up to $10,000 in debt for people earning less than $125,000 and up to $20,000 for those who also received Pell grants — was both more than some Democrats expected and less than many had called for.

Biden also announced a final extension of a moratorium on student loan repayments, providing more certainty to borrowers wondering whether those payments would resume next week.

Inside the White House, there was broad recognition the decision wasn’t likely to completely satisfy the spectrum of Democrats who have been loudly lobbying for debt relief. Some Democrats facing tough reelection battles this November distanced themselves from the move.

“This was never going to be a total win for us,” one Democrat involved in the discussions said. “Drawing out the process the way Biden has gives an opening for anyone to come in and fill.”

But after months of internal deliberations and delayed decisions, Biden and his top aides recognized they could no longer put off one of the persistent unresolved matters looming over his presidency.

From the opening weeks of the administration, it was clear there was no easy path on the issue for Biden. White House officials settled on a tried-and-true Washington strategy: Bump the issue from the President’s already-full plate in the opening months of the administration. They requested an extensive legal review by the Justice and Education Departments — and said little more beyond that.

One administration official, who was supportive of the idea of canceling debt, said it was viewed by some as a review that may never actually end.

“Bury it,” the official said of how skeptical officials viewed the White House approach to the issue. “They were wrong in the end. But there were definitely moments when it felt that way.”

Those who had spoken to Biden about the issue had their own reasons for skepticism. Unlike many in his party, Biden simply hadn’t embraced the idea that the White House had the authority.

Even if it did, two people familiar with the matter said, Biden regularly raised concerns of fairness in discussions about the issue, wary it would benefit primarily borrowers with the means to pay their debt — or those who predominantly attended top academic institutions. And what about those who chose not to go to college at all?

In April, Biden announced another extension of the pandemic-era freeze on federal student loan repayments — something officials had signaled was unlikely after the prior extension. Even then, officials had no clear read on where Biden would land.

By then, the administration’s reviews had been conducted — and completed, officials said. Biden’s policy and legal teams, while far from unanimous on the merits of the idea, were prepared with potential options.

Three weeks after Biden’s decision to extend the repayment freeze, the politics of the contentious policy and legal debate over forgiving student loans was laid bare in the Oval Office.

Biden’s advisers have taken a position of dismissing public polling, but inside the West Wing there is a constant stream of internal numbers that factor into strategy and decision making. Some outside polling punctures the Oval Office as well, none more so than a poll of young voters conducted by one of Biden’s 2020 campaign hands.

The survey, conducted by Harvard’s Institute of Politics, showed just 41% of young Americans approved of Biden’s job performance. It marked an 18-point drop from the year prior. Biden delved into the details of the poll himself — with the very people who put it together — in a White House meeting with Harvard students and their faculty adviser.

A few weeks later, John Della Volpe, the director of polling at Harvard’s IOP who became a trusted voice inside Biden’s inner circle, would advocate for student loan action with an unambiguous message.

“Beyond the essential economic bottom line, this action will begin to materially rebuild the fractured relationship between the leader of the Democrats and a voting bloc that was integral to his party’s most recent successes,” Della Volpe wrote in a New York Times essay.

The politics laid out in the Harvard poll and others during the spring was not a singular driving force for the decision, officials say, but they acknowledge it resonated among some of Biden’s senior advisers, including White House chief of staff Ron Klain.

It resonated with Biden as well. A decision to move forward wasn’t just about the policy itself; it was also about delivering on a campaign promise and delivering action — two issues highlighted as critical in the Harvard polling.

But turning Biden’s openness to move forward into final policy was hardly a straight line.

Intensive lobbying from fellow Democrats, including in the hours before he made a final announcement, contributed to Biden taking his time to land on a final decision — even as that delay left millions of borrowers in a state of anxious uncertainty.

When members of the Congressional Progressive Caucus visited Biden at the White House in late March, the President pondered aloud about one of his biggest fixations — ensuring that wealthy families wouldn’t benefit from loan cancelation. Some lawmakers in the room pointed out that setting an income cap likely wouldn’t make a major difference, since high earners were far less likely to take out loans to attend school to begin with.

He and top White House officials were also on the receiving end of pitches from top senators, including Sen. Elizabeth Warren, who had faced off against Biden in the 2020 Democratic primary and had famously made student loan debt cancelation a major pillar of her campaign.

The Massachusetts Democrat — who liked to drop a statistic about debt held by graduates from the University of Delaware — had begun lobbying Biden and his top aides on the issue as soon as the general election kicked into gear. The senator had dozens of phone calls with senior White House staff on the scope of potential debt forgiveness, as well as several direct conversations with Biden himself, according to sources familiar with those conversations.

Senate Majority Leader Chuck Schumer was also among the handful of top Democrats who lobbied Biden for much of his term to cancel student debt.

The push even continued after the deadly massacre at a Buffalo supermarket, when Biden traveled to the city in May to meet the families of victims of the mass shooting. On Air Force One and on the way back to Washington on May 17, Schumer made the argument to Biden directly that canceling student loan debt was the “right thing to do economically and morally,” the source said.

Warren, too, recently seized on rare face time with the President onboard Air Force One. Traveling with him to Somerset, Massachusetts, in July ahead of Biden’s major speech on climate change, the senator again pressed him on the urgency of the issue.

In recent months, Warren had begun pushing the White House to consider additional student loan cancelation on top of the baseline forgiveness that the administration was leaning toward for people making less than $125,000 per year, with the hope of raising the total amount of forgiveness that the lowest income Americans would be eligible for.

Vice President Kamala Harris routinely made the case for widespread student debt cancelation, a source familiar with discussions, told CNN, including directly to the President himself.

“It wasn’t a secret that she was an advocate for debt cancellation,” the source said.

Jayapal, who said she had been in touch with White House officials in the days leading up to Biden’s announcement, said she sensed that that final number — $20,000 in maximum loan forgiveness for Pell grant recipients — was “in flux, until the very end.”

“I think it’s been a journey for the President, let’s put it that way,” said Jayapal, who called Biden’s announcement this week a “huge victory.”