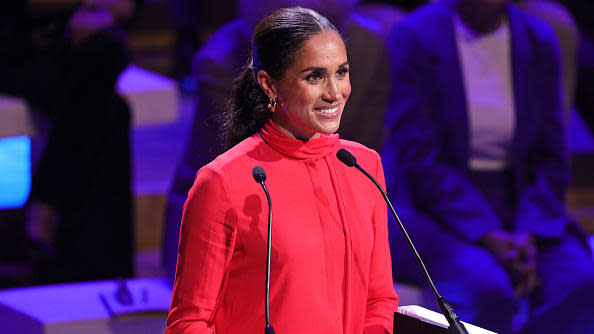 Royalist is The Daily Beast’s newsletter for all things royal. Subscribe here to get it in your inbox every Sunday.

The British media, and Meghan Markle’s usual chorus of critics, confronted a shocking new reality Monday: the Duchess of Sussex made a bland speech about a charity she spearheads. No one was trashed. No sideways criticism of the queen, Charles, or the royals generally was made.

Meghan, back in the U.K. with her husband Prince Harry for a bit of cold-shouldering by the suddenly very busy queen, was the keynote speaker at the One Young World conference in Manchester, England.

Tina Brown: Princess Diana Would Not Have Been a ‘Great Fan’ of Meghan Markle

The charity says it is focused on, “Empowering and developing young leaders to build a fair, sustainable future for all.”

Referring to a passionate speech preceding hers by Sir Bob Geldof–about the vicious and selfish whims of dictators, and fighting against authoritarianism for true social justice and change—Meghan said: “As you’ll likely hear many times this week, and as we just heard, you’ll hear all sorts of things; some very heavy, some very uplifting. But the resounding spirit I believe you’ll hear is that you are the future.

“But I would like to add to that, that you are also the present. You are the ones driving the positive and necessary change needed across the globe in this very moment, and for that I’m so very grateful to be in your company today.”

The speech was long on progressive sentiments, the general thrust of which would be unlikely to come as a huge surprise to those who have subscribed to Meghan’s chart-topping Spotify podcasts. Word clouds would likely pick out terms such as, “representation,” “inclusion,” “global community” and “the future.”

It was also preceded by a lengthy period of sitting on stage with Prince Harry and a rather random assortment of the charity’s supporters. These included such small names as a “partner at Clifford Chance” and KPMG’s “head of social and governance.”

It was therefore, rather oddly, almost exactly the kind of thing that the official royals are forced to endure, day in, day out—albeit with Meghan’s added American-actorly parlance giving her innocuous speech a smooth, shiny, smiley sheen.

All the elements of the classic, mind-numbingly dull, royal gig were there: Harry and Meghan had to clap for an eternity as the flags of 195 countries were paraded before them. The band played God Save the Queen (although did so wisely, perhaps, before the cameras were on Harry and Meghan). And what could be more establishment than proceedings being given a frisson of danger by Geldof slagging off the Anglophone political elite?

Unfortunately for Meghan, however, the media remains far more interested in her than her message.

In the Sun, Meghan’s speech was criticized by Ingrid Seward, editor in chief of Majesty magazine, who said: “I can’t visualize or comprehend how the 2,000 young people understood a word of what she was talking about. It made no sense. It was all about her and related everything to herself. I don’t think she knew what she was talking about. It was just ‘me, me, me’ and praising herself.”

Some blame the tabloid press for being fascinated by gossip and minutiae to the exclusion of Meghan’s causes. Today’s objects of fascination are: Meghan and Harry caught the train to Manchester! William and Harry are not going to see each other during his trip to the U.K., despite (probably) being able to see the smoke from each other’s chimneys!

But it’s worth noting that the festering muck heap of the Windsor feud was stirred back into a stink by none other than Meghan herself, her interview with The Cut being a very deliberate distribution of chum in the water.

Criticizing the royals—“Just by existing, we were upsetting the dynamic of the hierarchy,”—and quietly threatening to say more about life in the gilded cage whets the public appetite for scandal. (So too, of course, does breaking the golden rule of not equating one’s wedding to the freeing of Nelson Mandela in media interviews, although that might not have been quite such a thought-through bit of catnip scattering.)

Together with the imminence of Harry’s memoir—and the fact the family seems to be avoiding them as the contents and tone of said memoir remain unknown—the couple are better known for family- and media-attack mode right now than making polite speeches like the one Meghan delivered in Manchester.

So, no small surprise that you could almost hear the crowd think, “Is she going to say something about the royals?” when Meghan started referring to her “husband” and how her life had “changed rather significantly” after marrying him.

And then you could sense the air going out of the balloon when she revealed the significant change to which she was referring was …a shift in her “worldview” caused by having a baby.

Meghan has fed us a diet of gossip and scandal for two solid years now. Of course she would have been pilloried had she used the charity event to air her grievances with the royals, or run through the events of that contentious bridesmaid’s fitting once again.

Monday’s speech, however, poses a question about which version of Meghan the media, and the public, want. Having urged her to do good works and not trash the royals, it ill-behooves the media to complain when she does exactly that.

But the truth is that keeping the public’s interest as she shifts her talking points around to saving the world is going to take some managing—not least because, in England, when they’re not busy blowing pheasants out of the sky, that’s what the royals do.

Read more at The Daily Beast.

Get the Daily Beast’s biggest scoops and scandals delivered right to your inbox. Sign up now.

One thought on “Meghan Markle Makes a Speech, Amazingly Free of Anti-Royal Venom”