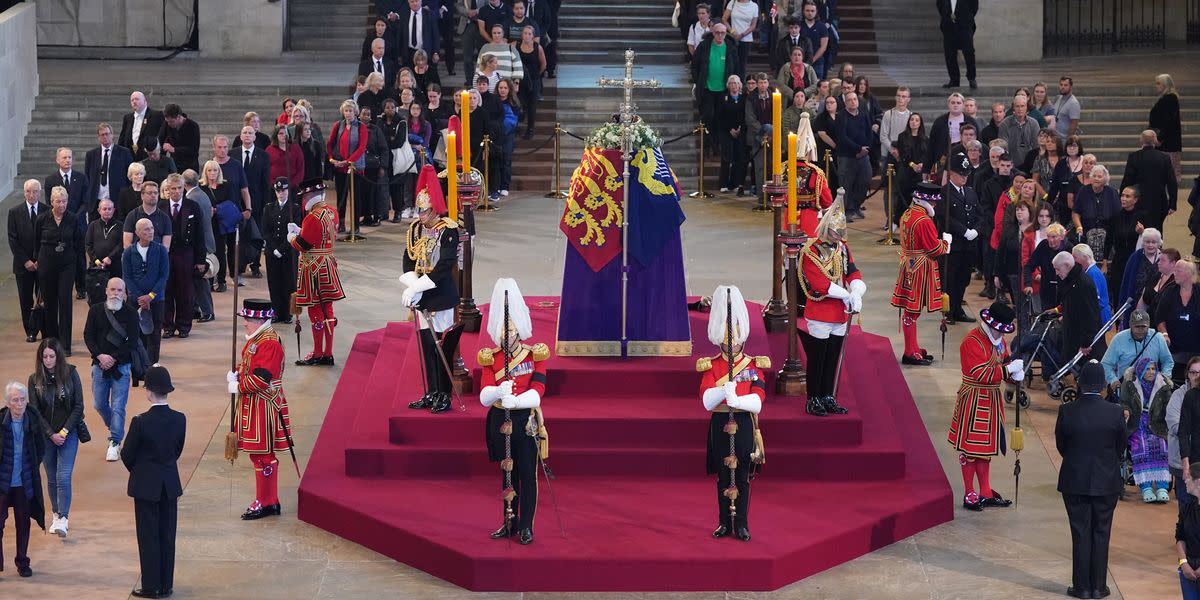 A royal guard watching over the queen’s coffin at Westminster Hall in London suddenly collapsed, with the shock moment broadcast on a livestream of the late monarch’s lying in state.

The black-clad guard was standing at the foot of the queen’s casket when he suddenly fell to the floor at around 1 a.m. Thursday.

The service began broadcasting globally via the BBC News website at 5 p.m. Wednesday, when the doors of Westminster Hall opened to the public.

Footage taken from the live broadcast of the fall was posted to social media.

The guard was holding a ceremonial staff when he appeared to faint, with nearby officials quickly rushing to his aid.

As he was tended to, the live feed quickly faded to an exterior, night-time shot of the building. Over an hour later, the broadcast had still not returned to the scene inside the hall.

It was not clear why the guard fell or his condition.

Soldiers in ceremonial uniform are maintaining a constant, 24-hour vigil around the queen’s coffin while she is lying in state.

The guards from units which include the Sovereign’s Bodyguard, the Household Division or Yeoman Warders of the Tower of London are required to remain completely still at the four corners of the regal platform, known as the catafalque.

While the soldiers rotate every 20 minutes, the hours of remaining completely still while standing are six-hours in length.

The incident happened on the first night of the queen’s lying in state which gives members of the public the chance to pay their respects to the late monarch.

The number of people viewing the dedicated stream of the lying in state rose to about 20,000 during the first hour of the broadcast.

The first members of the public pay their respects as the vigil begins around the coffin of Queen Elizabeth II in Westminster Hall, London, where it will lie in state ahead of her funeral on Monday. (Photo: Yui Mok via PA Wire/PA Images)