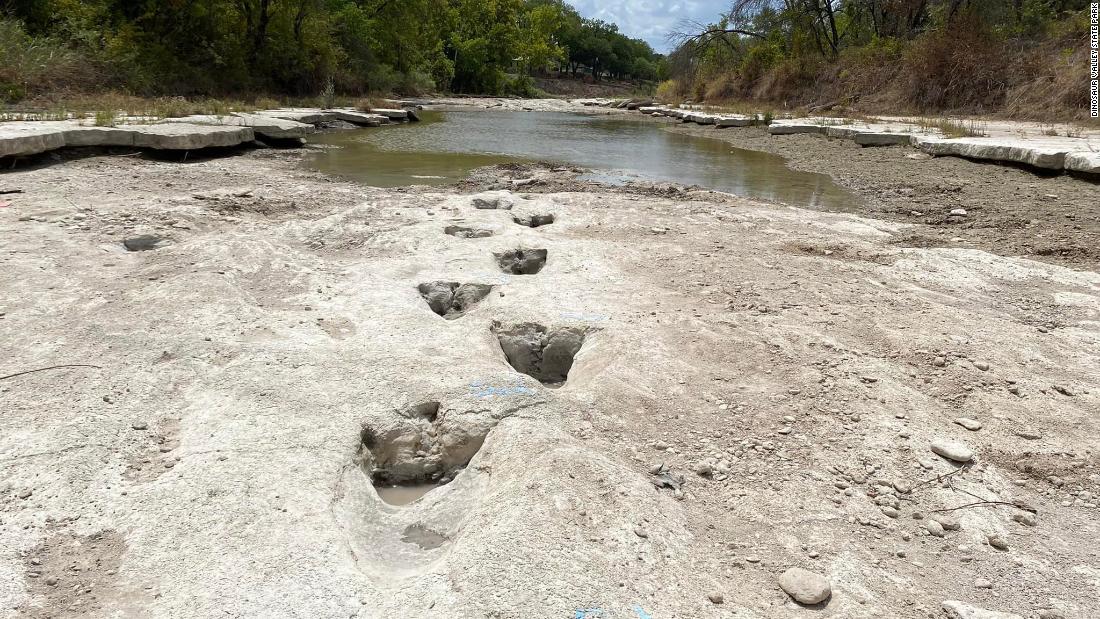 “Most tracks that have recently been uncovered and discovered at different parts of the river in the park belong to Acrocanthosaurus. This was a dinosaur that would stand, as an adult, about 15 feet tall and weight close to seven tons,” park spokesperson Stephanie Salinas Garcia told CNN in an email.

The other species that left tracks behind at the park in Glen Rose, Texas, was Sauroposeidon, which would be about 60 feet tall and weigh about 44 tons as an adult, Garcia added.

The tracks were spotted after this summer’s excessive drought conditions, which caused a river in the park to dry out completely in most locations.
As of last week, more than 60% of Texas was experiencing drought in two of the most intense categories, according to the US Drought Monitor. The state also recently experienced heatwaves that pushed temperatures in the triple digits, leaving millions in the state under excessive heat alerts.

Under normal weather conditions, however, the dinosaur tracks are typically under the water and filled with sediment, which buries them and makes them less visible, Garcia explained.

“Being able to find these discoveries and experience new dinosaur tracks is always an exciting time at the park!” Garcia added.

Meanwhile, the tracks are expected to be buried again as rain is forecast, according to Garcia, who added that the process helps protect the tracks from natural weathering and erosion.

“While these newer dinosaur tracks were visible for a brief amount of time, it brought about the wonder and excitement about finding new dinosaur tracks at the park,” Garcia said. “Dinosaur Valley State Park will continue to protect these 113-million year-old tracks not only for present, but future generations.”