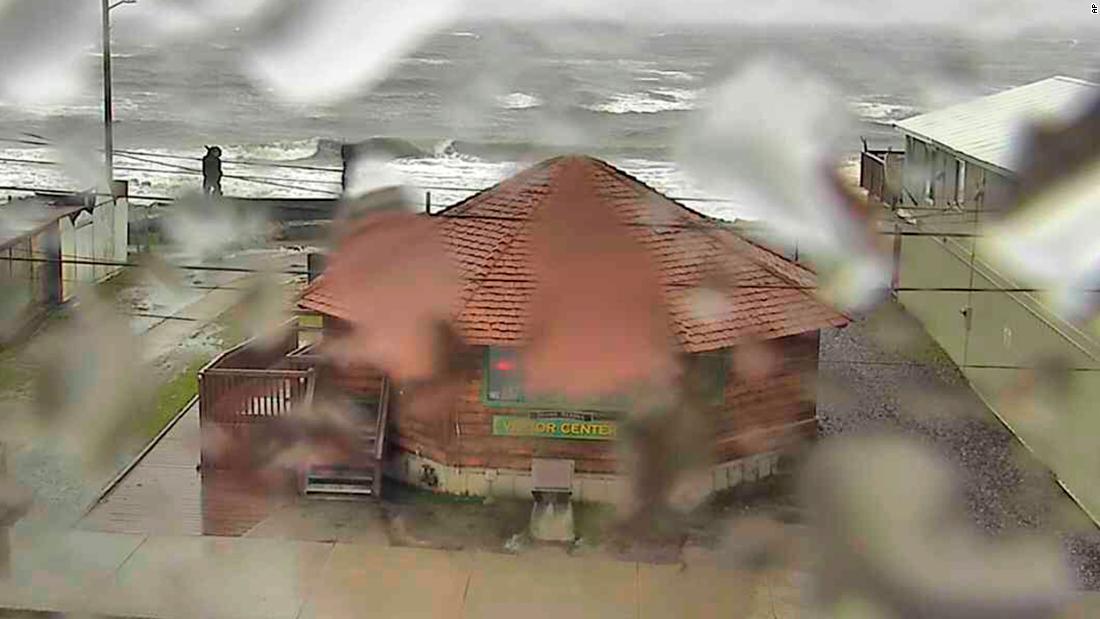 The remnants of Typhoon Merbok could potentially deliver the state’s strongest storm in over a decade, forecasters have said.

“The highest water levels not expected until this [Saturday] afternoon, flooding will get worse,” the tweet said. “Water is surrounding the school, homes and structures are flooded, at least a couple homes floating off the foundation, some older fuel tanks are tilted over.”

Alaska Gov. Mike Dunleavy on Saturday declared a disaster for communities impacted by the remnants of Typhoon Merbok along the state’s west coast.

Weather and local officials have been urging residents to prepare for the dangerous storm, which already reported hurricane-force wind gusts and wave heights over 50 feet in the Bering Sea Friday morning.

“As we receive more reports, we cannot stress this enough. PLEASE do not go near any flooded areas. Remember, turn around, don’t drown. It only takes 6″ to sweep you off your feet,” the NWS in Fairbanks warned.

Generally, the storm is packing winds between 40 mph and 60 mph, with gusts at 90 mph, according to the weather service. Water levels are could be as high as 12 to 18 feet above normal in some bays, with widespread areas 3 to 10 feet above normal.

And that’s why weather officials have advised caution as the storm stands to overwhelm critical infrastructure and wash away roads.

Late Friday night, water levels in the town of Golovin were rising rapidly, the weather service in Fairbanks said.

“Water continues to rise and will be rising throughout the night. Significant impacts are likely to continue. Stay safe,” the weather service said.

It could take about 10 to 14 hours for the water to recede, causing flooding to linger through Saturday night, the weather service warned.

The storm has triggered multiple extreme weather warnings for coastal flooding, high winds as well as air due to threats of low-level severe turbulence over western Alaska, according to the weather service.

Coastal flood watches have also been issued for all coastlines along the west coast of Alaska between just north of the Arctic Circle down through the Kuskokwim Delta coast.

“Strong winds and coastal flooding will continue to increase Saturday afternoon local time. The peak of the winds is likely to occur overnight into Saturday morning, as is the worst coastal flooding,” CNN Meteorologist Derek Van Dam said.

On Saturday evening, water levels along Unalakleet, Shaktoolik and Golovin are expected to reach at least 10 feet above high tide and winds up to 50 mph with higher gusts up to 90 mph, according to the weather service.

Other areas including Shishmaref, Wales and Kivalina could see water reach at least 5 feet or higher this weekend.

In Nome, the water level is now up to 10.27 feet, exceeding significant storms from 2011 and 2004, according to a tweet from the NWS. The water level is still increasing and is expected to peak this afternoon before slowly receding.

City officials in Nome have opened a recreation center as an emergency shelter and urged their more than 10,000 residents to be prepared.

The Nome, Norton Sound station is reporting water levels of 8.22 feet above the normal high tide line, according to data from the National Oceanic and Atmospheric Administration.

“Port users should secure boats and vessels in the harbor and on Belmont Point. Please check your lines and gear periodically to avoid losses,” the town of Nome said on its Facebook page.

Nome, with over 9,800 people in the area, is also reporting street closures along River Street, “F” Street and Seppala Drive.

Meanwhile, the state’s division of Homeland Security and Emergency Management said local agencies are aware of the storm and were preparing to respond.

In 2011, Alaska endured a storm system that left behind a wide swath of destruction. Like Merbok, the 2011 storm was an extratropical storm. Such a storm or cyclone has cold air at its core — unlike a tropical storm or cyclone which has a warm core. Both can cause significant damage from strong winds, heavy rain and storm surge.

While most areas will see around 1 inch of rain with this storm, some could pick up as much as 3 inches through the weekend.

Even if Anchorage — more than 500 miles from Nome — picks up 1 to 2 inches of precipitation from this storm, it will push this year into the top five wettest years on record. The weather service in Anchorage said that winds peaked at 65 to 75 mph Friday night across the Kuskokwim Delta.