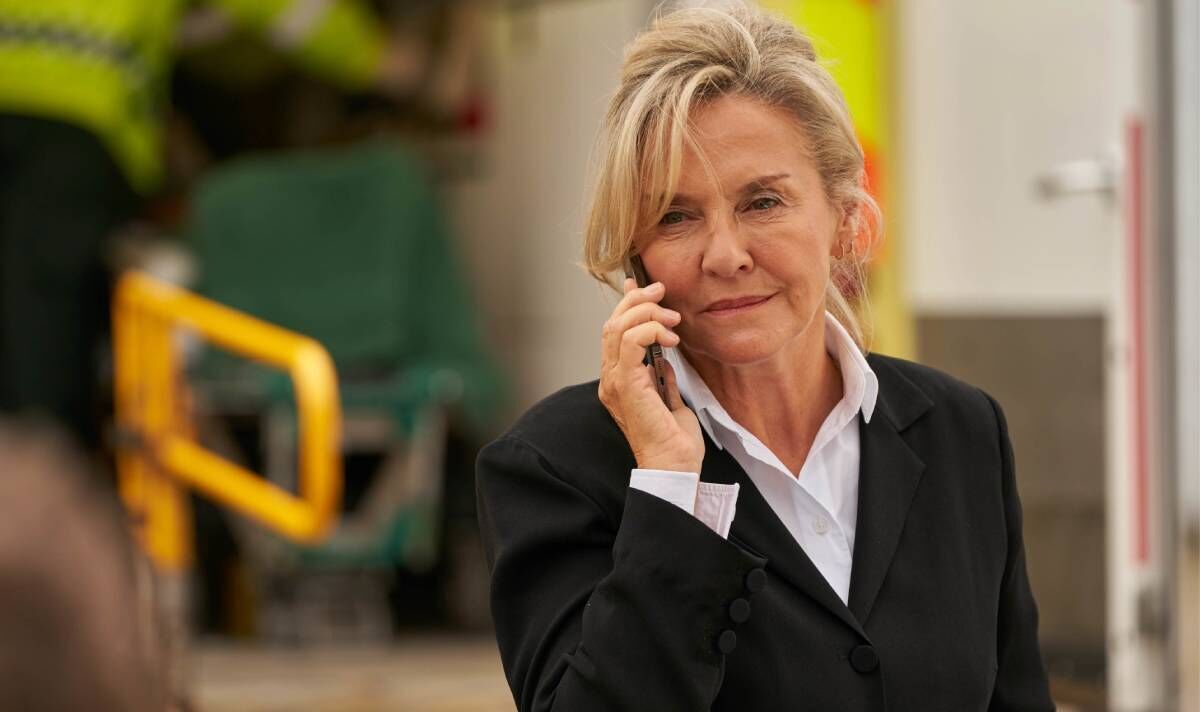 COOL AND CALM: The star on set for the 25th anniversary series (Image: BBC)

The drama acquired a dogged new crimebuster in the shape of Emilia Fox as Dr Nikki Alexander, and Amanda moved on to pastures new, playing a variety of characters, from an award-winning headteacher in Waterloo Road to a scary gangland matriarch in Marcella.

She had hung up her lab coat and moved on. “I never contemplated coming back, quite frankly,” she says.

“I had the pleasure of doing a magazine photo-shoot with Emilia about five years ago and we were laughing about the prospect of Sam coming back then. We were saying, ‘Ha ha ha, that’s never going to happen!'”

And then – just like that – it did. To mark the 25th anniversary of the show, which is now the longest-running crime drama in the world, Amanda, 65, was invited to return. She could not have been more surprised – or delighted.

“When I got a phone call asking me to come back, I was completely blown away. It’s wonderful to be very surprised sometimes. I just thought, ‘What a great idea! How brilliant that they’re thinking of doing that!’ I would have been absolutely mad not to do it.”

That’s not to say Amanda didn’t have a few initial doubts.

“At first, I was a wee bit worried that Sam might be some on-her-last-legs detective walking across the beach wearing an old tweed coat being called out of retirement,” she says.

But, of course, the character, last seen heading home to Northern Ireland when a member of her family was involved in a murder, is still at the top of her game.

“I loved the fact that she was still very much pioneering and busy and connected – that meant a lot to me. I was very happy that she wasn’t tracked down to some remote British village where she was judging hen competitions.”

The return proved very emotional. At a glitzy screening in a London theatre this week – complete with real forensic experts in the foyer combing a mocked-up crime scene for evidence in white scenes of crime officer suits – Amanda confessed: “When I first stepped back onto the set of Silent Witness, I wanted to cry.”

What makes Sam’s comeback all the more compelling is that she is now a more ambiguous character than the straightforward crusader for truth she used to be. In the very timely new series, she and her husband Jomo (played by Hugh Quarshie from Holby City) run a medical company pioneering the use of health passporting.

After a dramatic incident, Sam calls Nikki and her team, Jack (David Caves) and Simone (Genesis Lynea), for help. Amanda says the fact that there is now a question mark over Sam’s probity makes for a twist remote where she hen fascinating twist.

“Is she really telling the truth? Who is she working for? That’s very intriguing, as Sam has always been so much on the right side and always had such integrity. Now we are seeing she could be a double-edged sword.”

One group of people who will be particularly glad about Sam’s return are the legions of Silent Witness superfans. They frequently come up to Amanda asking when Sam is coming back.

“That often happens when I’m doing my weekly shop in the supermarket and I am a bit of a captive audience 20 bunches of bananas later! We always have a bit of a cackle about that.

“The fans, of course, are fantastic. They keep the show on the road.”

For her part, 47-year-old Emilia was equally pleased to welcome Amanda back. Her only concern was having to conduct one of Silent Witness’s famous post-mortem scenes in front of an actress who gained world renown for her poise and composure in such sequences.

Indeed, Amanda made them such a trademark that she was granted the honour of a memorable French and Saunders parody which was entitled “Witless Silence”.

Wearing a glamorous gold dress, Emilia says: “It was the most exciting thing to be able to celebrate the 25th series of Silent Witness with Amanda coming back.

Amanda, dressed in a striped T-shirt, black suit, trainers and multicoloured socks, says Emilia needn’t have worried because in the years away she’s lost her touch with the scalpels and bone saws. “I’ve become a lot more squeamish,” she admits.

“I have to turn away now. I was extremely happy that Emilia did all the post-mortems in this series. I could just be the bystander, stick my beak in and be irritating.”

Perhaps the hardest part of starring in SilentWitness is mastering the very complex medical terminology.

Emilia reveals: “We spend hours and hours learning the lines and trying to find riddle formulas to remember them. ‘There are two Bs in this sentence and three Ws in that one.’ Amanda and I laughed a lot about how many hours we spent learning lines. We could have shed tears.”

Viewers were extremely pleased that there appeared to be some resolution to the long-running “will they/won’t they?” question overhanging the relationship between Nikki and Jack when they enjoyed a highly anticipated kiss in the last series. So will their romance develop this year?

“The kiss threw up many questions,” says Emilia.

But aficionados should not expect a quick resolution.

“We wanted to lay the breadcrumbs and keep that flirtation and ambiguity about it,” says David, 42. “We didn’t want it to be too much, too soon. We wanted to tease.”

Silent Witness still generates huge ratings of nine million viewers per episode. Emilia thinks that staying topical through 25 seasons may be part of its continuing popularity.

“The DNA of the show is crime stories and the way people commit and solve crimes,” she says.

“But it also incorporates very topical stories like health passports and challenging stories like domestic abuse or care homes. We are not afraid of that – the show can take it. It gives us the chance to talk about subjects that people generally steer clear of. It allows viewers to discuss them from the safety of their sofas.”

So could the actors envisage Silent Witness surviving another 25 years?

“I don’t know if they’d still want me,” Emilia jokes. “I’ll be lucky if they’re still inviting me back when I’m 72. Still, they’ve just had Amanda back. Long may they keep asking us back.”

Amanda chimes in: “You’ll just have to ask me in another 25 years. By then Sam really would be judging hen competitions.”