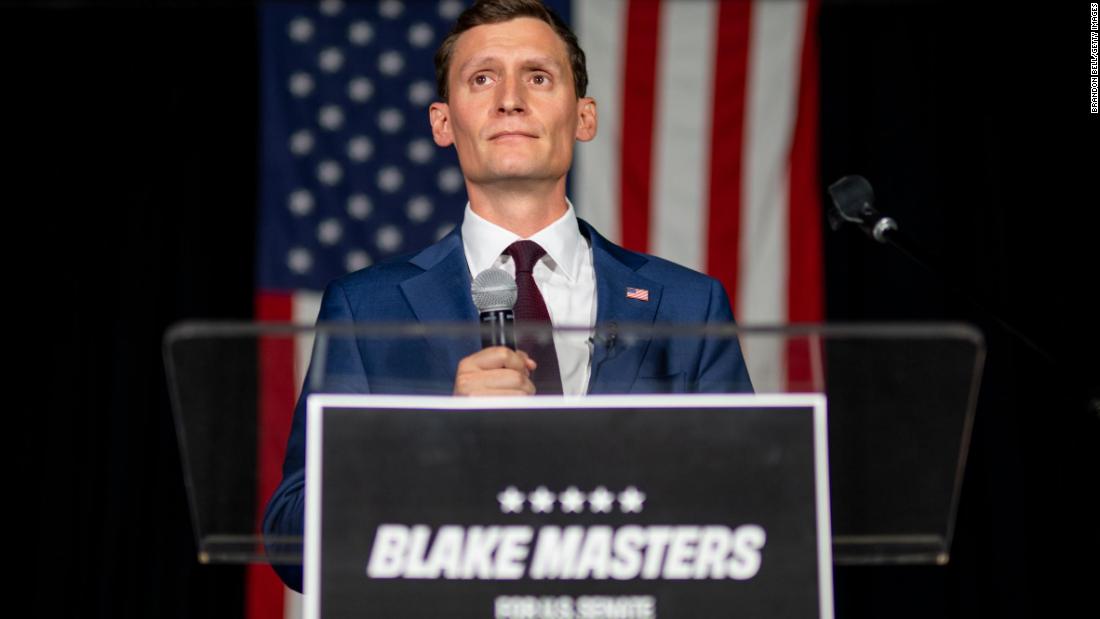 The shift signals the potency of abortion in the 2022 midterms and the fact that Republicans candidates, many of whom backed tough abortion restrictions during their primaries, now believe they need to soften those positions as they face a broader, less conservative electorate.

Masters’ website previously said he was “100% pro-life” and noted his support for a constitutional amendment that “recognizes unborn babies are human being that may not be killed” and the Pain-Capable Unborn Child Protection Act and a slew of other legislation that would make it illegal to perform an abortion 20 weeks after conception.

Masters is now looking to modify those views, with his website using more careful and less specific language on abortion and the candidate putting out a video that looks to scale back his strict positions.

Instead of saying he supports a broad constitutional amendment on abortion, Masters’ website now says he supports one that specifically “bans late term (third trimester) abortion and partial-birth abortion at the federal level.” Instead of listing the litany of abortion legislation he supports, the website now just broadly states that he supports “pro-life legislation, pregnancy centers, and programs that make it easier for pregnant women to support a family and decide to choose life.” And while his website previously noted his support for ending “taxpayer funding from Planned Parenthood, all other abortionists, and any organization that promotes abortion,” it now singles out Planned Parenthood, removing the reference to “abortionists” and other groups.

Archived versions of the website are not available on the Wayback Machine, a popular internet archive, but screen shots were provided to CNN. NBC News first reported on the changes to Masters’ website.

A person close to Masters told CNN that the Republican candidate designs, codes and updates his website himself — and that his recent updates to the abortion section reflect his desire to use his policy section as a “living document” rather than an immutable record of his positions.

This person said that Masters’ views have not changed and that he still holds the positions he has scrubbed from the site.

A spokesman for Masters echoed this in a statement provided to CNN.

“Blake is 100% pro-life. That hasn’t changed,” said Zach Henry, a communications aide to the Masters campaign.

A spokesperson for the campaign of Sen. Mark Kelly, Masters’ Democratic opponent, lambasted the Republican for the attempted shift.

“If Blake Masters thinks that he can quietly delete passages from his website and disguise just how out of touch and dangerous his abortion stance is, he’s in for a rude awakening,” said Sarah Guggenheimer. “No embarrassing pivot can hide the truth: Masters has called abortion ‘demonic,’ a ‘religious sacrifice,’ and backs a national abortion ban. Arizonans know the truth and won’t fall for this.”

The person close to Masters said that while his website has removed the reference to his support for a federal personhood law, Masters still supports a version of that idea. This person pointed to an interview earlier this month with The Arizona Republic in which Masters said he viewed the concept of “personhood” as beginning during the third trimester of pregnancy, which is later than when other proposed personhood legislation would provide protections to fetuses.

Around the same time he edited his website, Masters tweeted out a campaign video that cast his abortion views as “common sense,” using his updated positions to attack Kelly.

“Look, I support a ban on very late-term and partial birth abortion. And most Americans agree with that,” he says in the video.

Masters’ shift shows the difficult position some Republicans find themselves in on abortion, especially those running in competitive states. Since the US Supreme Court overturned Roe v. Wade earlier in the year, a series of elections have signaled Democratic enthusiasm around the issue of abortion with voters in Kansas keeping abortion protections in their state’s constitution and a House candidate in upstate New York winning a special election by making abortion the top issue of his campaign.

“It’s no surprise that Republicans are trying to mislead voters and hide their deeply unpopular positions on abortion rights,” said Christina Reynolds, a top operative at EMILY’s List, which backs Democratic female candidates who support abortion rights. “They know that voters are willing to hold responsible the people who take away their rights and they are concerned about their elections.”

Masters’ race against Kelly is one of the most closely watched Senate campaigns of the 2022 midterms. Kelly has amassed a sizable war chest in the race against Masters, raising $13.6 million in the second quarter of 2022 alone. Kelly has used the money to blanket the state in ads, spending around $16 million on television and radio ads between the start of May and late August.

Masters, however, was locked in a contentious Senate primary until early August, spending only a fraction of that on television ads during the same time. While Republican groups and committees plan to spend millions on Masters’ behalf for the general election, some Republicans are concerned that Kelly’s ability to define his Republican opponent early could make it difficult to win over voters in the final three months of the campaign.